February 20, 2013 By Aleksandra in Uncategorized 59 Comments

We sniffed it out a few months ago — we’re getting a puppy! A two-legged one!

Mama always goes on and on about how smart dog noses are — that they are many times sniffier than people noses. We never really knew what she was talking about until we caught a whiff of this two-legged puppy in the air (to be clear: the puppy was not in the air, it’s just the whiff that was in the air).

We can’t explain it, but all of a sudden, mama smelled different. Even before she started to look different. Human people had no idea that anything funny was going on with our mama, but we knew. That’s how smart we and our noses are.

Mostly, we haven’t been too bothered by the new smells and shapes, but the brown one of us has been a little more concerned about strangers, especially ones that are overly zippy and close-to-us in their movements. Mama says this is normal, and we’ve been working on it.

We’ve also been working on some other things — to get ready for the two-legged puppy, they say. Dad and mama have been putting on their thinking hats and thinking about different us-related things: our eating routines, our walking routines, what rooms we hang out in, what things make us most worried, the different games we play.

And the thinking hasn’t just been for nothing, you see. When you’re getting ready for a new two-legged puppy, it’s best to plan ahead and make any big (and small!) changes in routine well in advance.  As it turns out, we hear that two-legged puppies are way more work than four-legged puppies at first, so putting on thinking caps and thinking about dog routines after the puppy has showed up might be a hard. So our people are doing what they can in advance!

And as much as we love keeping secrets, we’ve decided to put on our generosities and share our ideas and activities. Over the next few weeks, we’ll be telling you all about our new activities: how we’re learning to walk with a two-legged-puppy-wheeled-transporter, how we’re learning to like spending more time by our lonesomes, how we’re getting our friends and family ready to help us have fun and exercise those first few weeks, and other important things. After all — maybe we’re not the only ones with a puppy on the way? 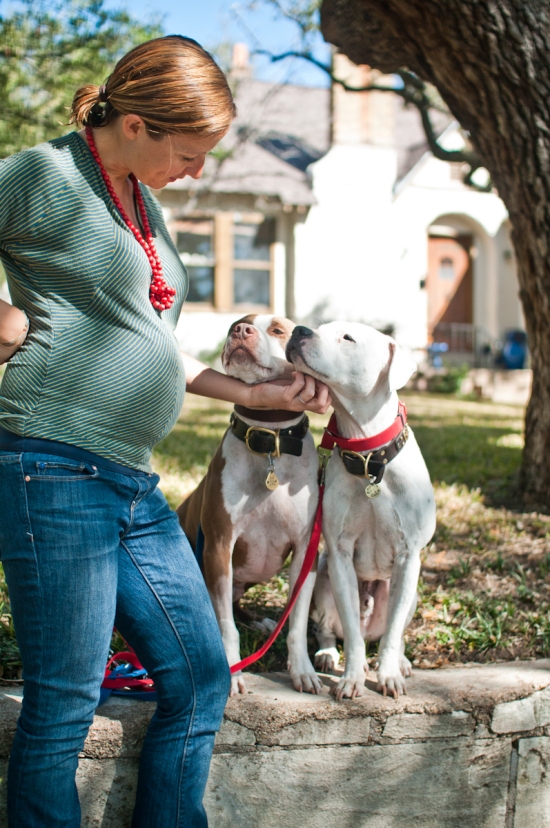