Our decision to start fostering was not rooted in one single reason, although I could most cleanly trace it back to this: I have always wanted to foster dogs. It’s an intangible and squishy reason, which makes it an utterly unsatisfying answer. So last week after our very first foster, Lollie Wonderdog / Lily Fireworks, moved into her new forever home, I thought it was time to search for better answers. I came up with a few. The first two are below. The next few to come.

Chick is a good mentor.

Our resident wonderdog, Chick, really is a model dog. He has impeccable manners, never says a peep, wouldn’t dream of asking for anything, is the best cuddler in the world, and has the most expressive ears and eyes. He has been an excellent tutor in good behavior to his rather uncivilized uncle Tex the black lab, who in his worse days is a slobbery, bouncing, yipping terrorist (though on his good days, thanks to Chick, he is sweet and quiet). I have always had a nagging feeling that it is a waste of Chick’s excellent dogness not to share his talents with other animals who are still learning how to behave. He may not have taught his foster sister Lollie/Lily much, but he did teach her how to pee outside, and that certainly counts for a lot.

teaching tex how to bounce

Pit bulls need all the advantages they can get.

It’s easier for a camel to pass through the eye of a needle than it is for a homeless pit bull to get out of a shelter alive. Is that how the old adage goes? I won’t depress you with statistics, but pit bulls really do have a hard time being adopted. They have an unreasonably bad reputation (although fabulous groups like BAD RAP and StubbyDog are working hard to turn this around), and with so many worthy dogs available in shelters, pit bulls are often overlooked. I have often said that people who don’t already adore the bully breed group are just people who haven’t really spent time with any bully types. Put simply, many people just don’t know what these dogs can be like, and can’t picture one in their lives. Fostering is a perfect way to counter this all-too-common lack of imagination. If we, a non-controversial young professional couple, bring a foster pit bull into our home and successfully demonstrate how perfectly a dog like Lollie/Lily can fit in, won’t that open some minds? It’s hard to make any sweeping generalizations, but since we took Lollie/Lily in, handfuls of people have written us to say that their eyes have been opened. 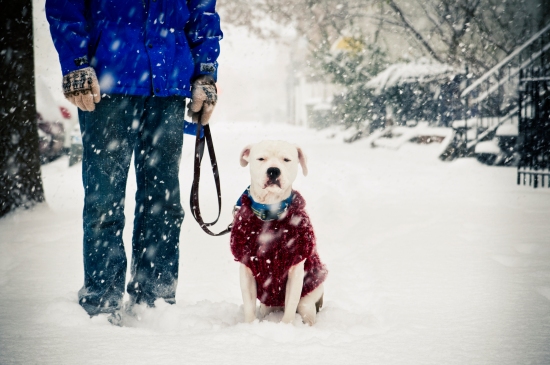