October 26, 2012 By Aleksandra in Uncategorized 26 Comments

I’ve been telling mama and telling mama — we need a real family photo with all of us people and dogs in it, not just handsome me, silly brother Doodlebug, and daddyman. Mama needs in too! But she’s always behind that black, treat-dispensing clicking device, so she almost never gets in our photos. So after eons and eons of trying, I finally convinced her to get a friend to take some official-like family portraits for us. So here are some!

As you can see, I was feeling a little grumpy because mama pulled me out of bed so early to get pretty for our photo shoot. Poor Doodlebug just looks confused, as always. Still, we think our pal — and very talented Austin wedding photographer — Cecily Johnson did a smashing job! 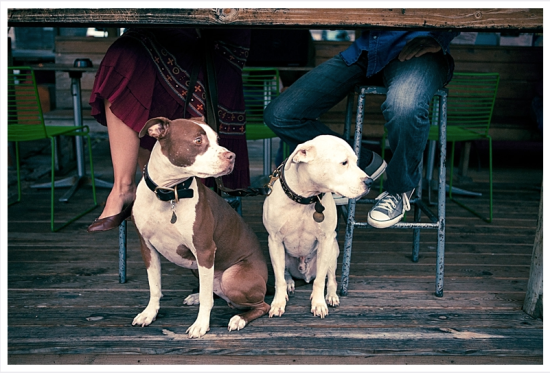 Well friends, I am ready for you to congratulate me, because I have a very large, major accomplishment to announce:

This year, I am not moving.

Are you wondering why this is a big deal? I will tell you. It’s because this is the first year in my whole entire life that I have not moved at all. Now are you impressed?

You see, in my first year I moved from inside my mama to outside my mama. Then the next year, I moved from a place I don’t care to remember to the slammer, and then from the slammer to my mama’s house that smelled like Mexican food and laundry. Then the following year, I moved to a place with no fenced yard. The next year, I moved to my grandparents’ house for the summer, then back to the place with no fenced yard. Then the year after that, I moved to the place with the doggie door where I became a criminal. And then the next year, I moved from my home country of Texas to a cold place called DC, and lived in a narrow house where I got to play City Dog. And wouldn’t you know, only 9 months later I moved to the place with the big windows and the squirrel trees in the yard. Then only a year later, I moved to another house with squirrel trees, where we started our fosterings. And gosh, just when I thought we were settled, we dug up our cowdog boots and pearl snap shirts and moved right back to Austin where we belong! And that’s where we still live now, in the next year. So this whole summertime I’ve been pacing around wondering when it’s time to move again, and then I finally figured it out– there are no brown boxes and piles of paper, and I’m not feeling extra-nervous-like. We’re not moving. What a funny feeling!

But, I bet some of you are moving, or will move someday in the future. Since I’m such a moving expert, I thought I’d give you some tips on how to move like a pro without worrying your dogs too much. 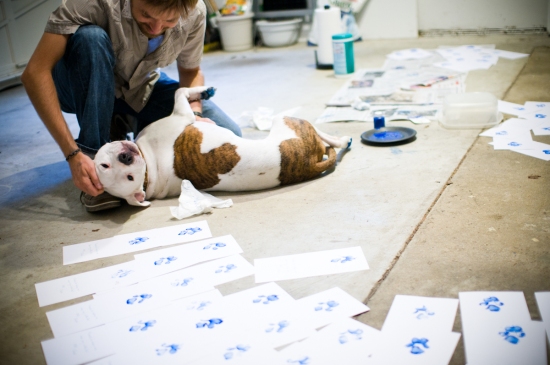 1. Get your paperwork in order.

Before you get too far down the packing-and-moving route, make sure you have your pet’s vitals in order. Check your vaccinations with your vet, make sure your microchip info is up to date, double-check her tags for accuracy, and have a photo and description of your dog handy throughout the process — just in case. In the stress and chaos of moving, your pet is more likely to wander out an open gate or get spooked and bolt, and you want to be ready to act in case the unthinkable happens and your pal goes missing. I have never disappeared during a move because I’m more the cowery-in-the-corner type, but that doesn’t mean other dogs wouldn’t find themselves astray. Be prepared!

If your dog is a worry wart like me, it’s nice to spend an extra day or two at the beginning of packing up making the move a game. Hide some kibble in a big mountain of packing paper, for example, or play a “toss the treat” type game in and out of assembled cardboard boxes. Feed your dog on or near a cardboard box, and play “fetch” or your dog’s favorite game while sliding heavy boxes around on the floor. My mama always plays these kinds of games with me, and even though I still worry a lot, the games make me get a little bit excited when I see the big brown boxes instead of just plain terrified. Thundershirts and herbal de-stressing tonics are also good to pull out during these times.

If your dogs are anything like me, stressiness makes them collect a little extra steam to burn off. So when we’re going through something stressy, like a move, or a rainstorm, or a long boring couple of days when mama has a cold and won’t play with us, there is one thing that always helps us relax: a good old-fashioned silly game. Sometimes we run zippy laps in the yard, sometimes we play fetch, and sometimes mama or dad takes us for a run. Exercise is always important, but extra important during move-related stressiness, when dogs sometimes don’t get the walks and individual attention they deserve. Even 5-10 minutes of intense play here or there make a big difference to me. After a nice rousing game of tug or fetch, I’m ready to snooze while mama spends the afternoon deciding which shoes to bring and which to donate. Zzzzz.

No, don’t put your dog in the box (even though I like to nap in boxes). But do put her favorite things. Her favorite blanket or bed, her bowls, a few days’ worth of kibbles, her most special toys, and some puzzles and treats. As soon as you get to the new place, unpack your dog’s box and make her a nice, cozy spot that’s all hers. Having her things there will help her feel at home and make the adjustment a little easier. Go ahead and toss that Thundershirt and Rescue Remedy in the box, too. 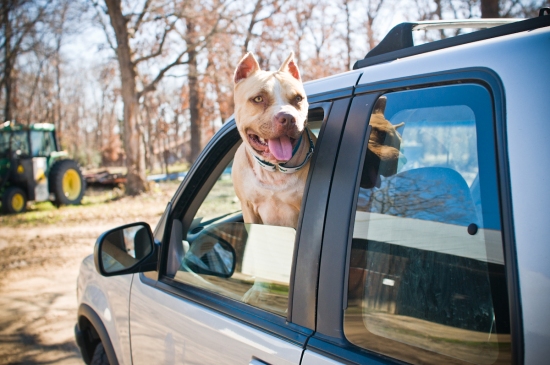 5. Give your pooch a vacation.

Mama wasn’t clever enough to think of this until after our hundred bazillion moves, but it’s still a good idea for the rest of you: for the last day or two before the move date and the day or two after the move, send your furry friend to summer camp — whether that’s at a friend’s place, your favorite boarding facility, or grandma’s house. Even though kenneling can be stressful for dogs, it’s probably less stressful than winding up under foot while strangers are taking all of their things out of their house and putting them in a big van.  Or if you can’t gift your doggie a vacation, at least find a nice quiet spot in the house — a cozy crate or a remote bedroom, for example — where your dog can hang out during the commotion. Turn on the radio, fill the spot with comfy beds and pillows, and offer a steady supply of games and puzzles — like frozen stuffed marrow bones — to keep your buddy entertained while the humans do all the hard work.

And most importantly, remember to breathe. Moving is exciting and stressful for everybody, but you’ll get through it just fine! I’m the most worriest dog on the planet and I’ve managed to move nine times, only coming out with a few extra wrinkles in my furrowed forehead. You’ll be fine too!

I am feeling so very loving and generous today that even though it’s CHIX-A-Lot Friday, I’m going to tell you about something that my brother, DOODLEBUG, got to do yesterday.

Of course you are wondering: what in the world is Doodlebug doing? And I will tell you the answer: 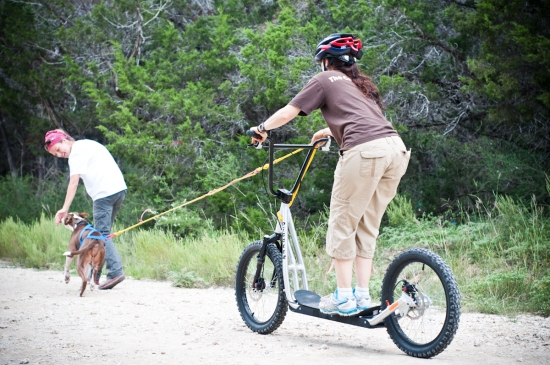 You see, the training center where my brother and my mama and I work does a supercool trip every winter to Colorado, where people and dogs get to cross-country ski together — that is, the people ski and the dogs pull them in the snow in special blue crisscrossy harnesses. Pretty neat, right? Well, mama’s boss has a bunch of Huskies, who are stone cold naturals at towing people in the snow, but some of us other kinds of dogs aren’t quite as innately skilled at towing. So this year, to get some of the Huskies and non-Huskies ready for the trip, the Center got this cool scooter, and is going to be teaching dogs how to tow people on it — it’s just like cross-country skiing, but in Texas! And without the skis. Or the snow. But still. It’s great practice!

And so yesterday, after the Huskies took the scooter for an inaugural spin, mama’s bosslady asked everybuddy: who else wants to try? And my brother immediately raised his paw — memememe! And even though I was pretty jealous that he got to scoot while I had to just sit and watch, I gotta admit — I was pretty proud of him. He took to it really quickly — even better than the other dogs who tried. And it was hard work for a lazy bum like my brother!

And the best part? A few minutes of towing Aunt JJ on the scooter and he was totally pooped out.