I’m still pretty drowsy and icky from my spay surgery yesterday, but I promised I would tell you about my swimming on the vacation I took my foster parents on over July 4 weekend, so here I am! If you missed the first part of our adventure, you can read about it here.

So. The swimming. Mom and dad weren’t so sure that I would be a good swimmer and I know I can get a little scared in new places, so they thought it would be best if I had a swimming jacket to keep me nice and cozy and safe. I think they were worried about me trying to jump out of the boat when it started to go vroom vroom and drive fast as the wind, but I just wanted to lay on the bottom wrapped around mom’s legs. That’s the safest place to be, after all. Anyhow, I love my swimming jacket! I can swim without it too, but I’m so skinny that sometimes my back half kind of sinks, and it makes it a lot harder. So I just kept it on!

First I started out by just deathing some sticks on shore. They seemed very threatening and I wanted to keep my mom and dad safe, since they are so nice and they don’t seem to understand the danger of sticks. Here’s a picture of me deathing one. Death to stick!!

But then my dad — he’s so silly — picked up another dangerous stick! I was so worried that he was going to get bitten by it, so I knew that I had to death that one too. Here I am trying to death the one that he was holding, silly dad:

So THEN, things got even crazier. Dad took the rogue stick, and threw it straight into the water! I couldn’t believe it! So what was a girl to do? I had to go get the stick and death it once and for all, so that it couldn’t hurt me or my people. And so without any hesitation, like the brave hero that I am, I bounded into the water after the stick, like this:

Well it sure was risky going out into that water after the stick, but it payed off. Turns out the stick didn’t want to hurt us after all, it just wanted to play! And it also turns out that I am a most bodacious swimmer! Here’s a video of me swimming:

After I took a little catnap I got to swim again, only this time, a tennis ball was playing with me. I gotta tell you, that tennis ball sure can fly, but once it gets into the water it is SO lazy. I caught it every time. It’s almost like it didn’t even try to get away! 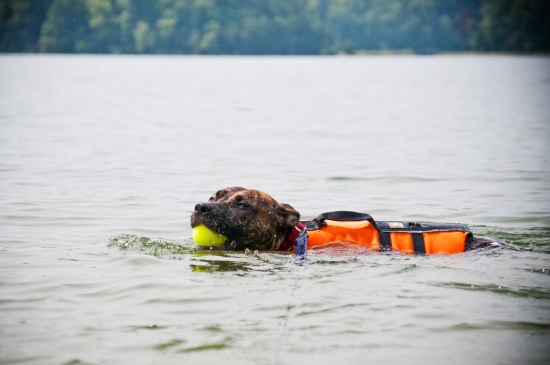 So now you know the whole story!