November 9, 2011 By Aleksandra in Uncategorized 19 Comments

This post is very special to me. I met Chris in 2005, and he and his wife Colleen were my first exposure to fostering, and my first exposure to multi-pit bull households. Chris and I emailed extensively about dog-dog intros and about the ins and outs of fostering. I told him that Ben and I hoped to foster someday, but didn’t know if or when we could do it. His gorgeous photographs really got us. Years later, I can say with certainty that their work with the Animal Compassion Network in Asheville, NC was our #1 inspiration for taking in our first foster, Lollie Wonderdog. Thank you Chris and Colleen — from us, Chick, and all of our fosters, past and future.

Tale of a reformed failed fosterer

Colleen and I got introduced to fostering when we moved to Asheville and a local organization, Animal Compassion Network (ACN), was appealing for funds to temporarily house animals from a no-kill shelter that had flooded.  We donated and eventually started volunteering for ACN.

But, it wasn’t until our third attempt at fostering that we actually went through with it and didn’t adopt.

Our first foster failure, Freckles, was a stray that was running the mountain road up to our neighborhood for about a week.  She had this jaunty one-up and one-down ear pose and the biggest pit bull smile.   We asked about her with the folks at the bottom of the mountain and got the response that they were going to call animal control to pick her up.  That is when I tried to entice her into my truck but she just barked and ran.   However, when Colleen opened the door to her car, she jumped right in.  We did due diligence on finding her original home and didn’t find anyone that knew anything about her.  We checked with the shelter and had her scanned for a chip.  When nobody stepped up to claim her she was spayed and stayed.  Bailey who is also a pit bull was in another foster home and we were a bit conned into taking her in.  In Freckles’ case I just couldn’t part with her and in Bailey’s case she was heartworm positive and covered in mange.  By the time she was clear of both I couldn’t part with her either. 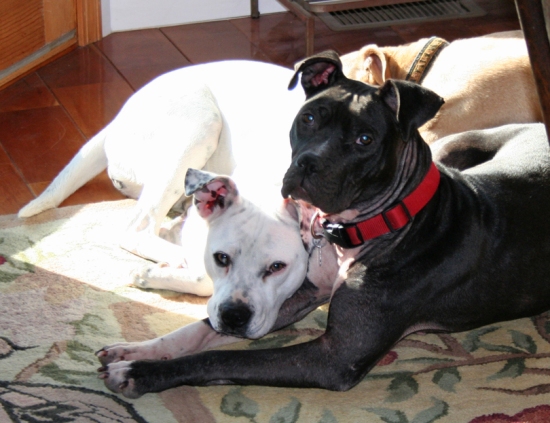 Our first fostering success was Jason who later was renamed Henry.  He was a brindle pup who I think was a Plott Hound/Dachshund mix.  He assimilated into our pack very quickly.  He and Happy, our dominant male, loved playing together. Being ultra cute and young, he was adopted very quickly.  That is really the hard part.  Seeing them go.  But, it sure helps when you know they are going to a great new family.

The next two dogs we fostered were pit bulls or pit bull mixes.  I have been living with at least one pit bull since 1984.  Due to this experience and the fact that we had four pit bulls; we were often the first people asked to foster the breed.  On one hand this gives us an advantage due to our familiarity of the breed but it also involves four introductions and four chances of personality conflicts.   Our first pit bull foster was Humphrey.  I absolutely fell in love with him and would have become another foster failure if Colleen had let me.  He was a big goof who loved everybody.

It didn’t take long for him to break someone’s heart and he was adopted.  He now lives the good life as a lake dog.  Two days after he was adopted we were called to foster another dog.  The shelter we originally gave money to house animals due to flooding was being closed by the state.  It was a case of a no-kill shelter gone bad.  We were called in to foster Saki who is a border collie/pit bull mix.  He was not only obese and had a bum knee but was heart worm positive.  Saki was apparently the dominant male in a ten-foot by ten-foot run.  This meant that he ate most of the food.  Unfortunately, he brought this alpha mentality home with him.  He and Happy did not hit it off.   They did have an altercation which forced us to separate them when we weren’t there to supervise.

Saki was successfully treated for heartworm and lost almost twenty pounds with us.  He had his knee rebuilt and is a gorgeous devil…but after a year went by, he still was living with us.  I don’t know if it was his long term stay at the shelter or some other experience that made Saki absolutely hate confinement.  He would literally tear a metal crate apart to get out.  This behavior did not make for good impressions at adoption events.  Knowing what a great dog he was, I talked my parents who had just lost their rescued dog Pinot to adopt him.  So, now he is the golden child of my parents and can do no wrong.  He spends his time between Breckenridge, Colorado and Asheville, North Carolina.  Not too shabby.  And…I get to see him often.

With every foster you have the chance to not only save one but two animals.   You are opening a spot at a shelter for another dog who might be short on time.  Fostering is to me just one element of achieving a zero kill community.  Successful and enforced spay and neuter laws are the foundation to this.  Educating people on the problem of pet overpopulation is another important part of this.   But, I think that there will always be a place for fostering especially bully breeds.  They often have the shortest time in the shelter and usually are not included on transports to where there is a demand for adoptable animals.  There is also a need to foster older dogs and Elderbulls.

For anyone who is considering fostering for the first time, I would recommend asking these three questions.

#1.  Do you have the time to care for your foster?  Younger dogs especially need lots of exercise and play.

#2.  If you already have pets: What type of temperament would work with my dog or pack?  If you have a dominant male you might want to consider a submissive female.  We have found that very young males work best in our house.

#3. Are you willing to stay the course?  Sometimes you will have a temporary family member for longer than you expected.

I keep saying that we will take an extended break from fostering…But the fosters end up finding you.  Since Saki we have fostered Daisy (a senior chocolate lab), Oscar (pit bull), and now Petey (pit bull) and adopted Trevor (pit bull/part cat).  Only I thought Trevor was going to be a foster… 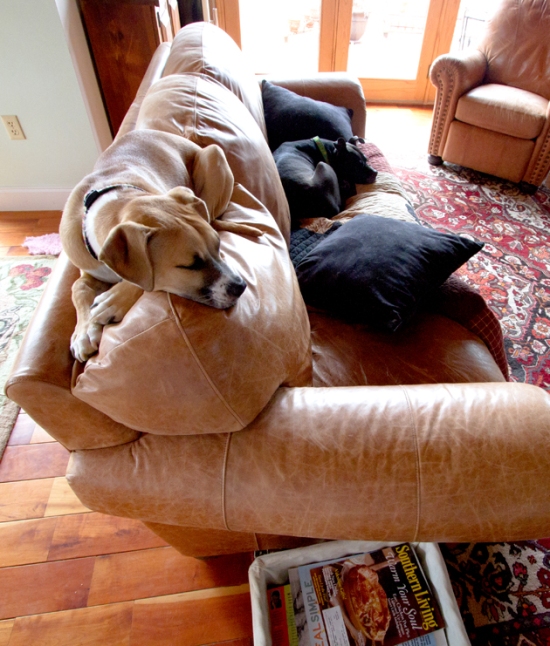 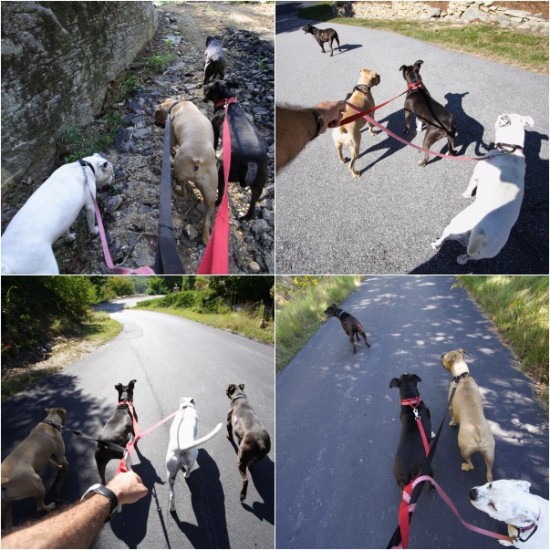 Fosters or not, Happy still has plenty of fun