We took advantage of the long weekend and Lucky Dog’s brilliant weekend foster program to send TANK off to spend the weekend with a wonderful guy who was willing to take care of him for a few days, while we headed for the mountains with Chick. We love backpacking, and considering how lazy TANK has proven to be outdoors, we didn’t think he would make much of a trooper. The three of us packed up and headed out to the beautiful George Washington National Forest in Virginia. 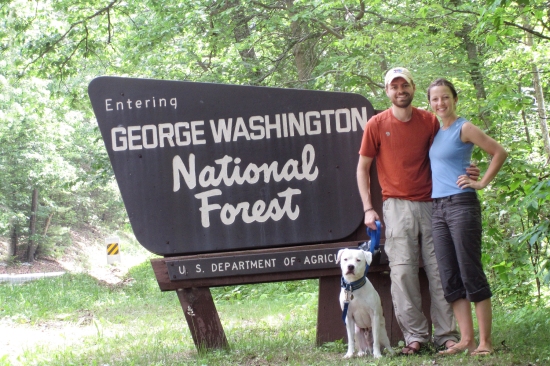 Chick loves backpacking because of all of the sounds and smells of the forest. Plus, he adores showing off his very own backpacking gear, in which he carries his food, water, toys, and poop bags. People are always amazed at how cute and self-sufficient he is in his pack.

He also loves backpacking because it gives him many, many opportunities to roll around in the mud. He takes each one of these opportunities.

When we finally get to camp after hours of trekking in the hills, Chick is thoroughly and satisfyingly zonked out, and loves nothing more than to snuggle up in our sleeping bags for a big nap. As a bonus, the sleeping bags protect him from the tiny biting flies that are his absolute most hated thing in the whole universe!

TANK also got to have a big adventure this weekend, though it was not in the wilderness like ours. In fact, he gets more wilderness at the creek in our very own neighborhood than he did over the weekend, which he spent in the city with a special friend.

Stay tuned tomorrow, when we will tell you about TANK’s big weekend!