I swear, if I ever met the person who invented the Kong, I would give him/her a great big kiss on the lips. Without this person’s contribution to dog happiness, we would be in a sad fosterplace.

It took a little while for Miss Stevie Wonder to gain the self-esteem to tackle the Kong puzzle, but once she did it, she DID IT.

For days 1-3, Stevie would scarcely touch any food, even if it was slathered in liquid fish oil, liver, and cheese (I know!!). The rest of week 1, she would gingerly eat her dinner and breakfast, but not if we were watching her. Week 2 she started to come around to daintily taking food from our hands, but only if it was in the form of cheese, string cheese, american cheese, cottage cheese, liver/cheese sandwiches, or similar food groups. Toward the end of that week, though, we finally got her. She became converted to the wonder of the Kong.

In our fairly limited experience with shelter dogs, there is a trajectory of self-assuredness that has to be minded, but if confidence is reinforced and built, most dogs will get to a point where they feel comfortable solving puzzles similar to a stuffed Kong toy. Our Chick was on the extreme end at first, where he was extremely food-motivated as long as the food was in our hands (he would do anything we asked for the piece of cheese we were holding) but if it took any brainwork to get the cheese out (from a kong, etc), he would immediately surrender.

When we explained this phenomenon to the greatest dog trainer that ever was, Lee Mannix solved our problem in a heartbeat. He had us start feeding Chick exclusively through puzzles and training, and never out of a bowl. If he refused to work at his puzzle, the portion of his daily ration that was in the puzzle got taken away. It sounds cruel, but he learned in about 1.5 days that from then on, he was going to work for his kibble. And he has been a 90,000% happier dog since. The task of dog food puzzles helps him focus, work, and then relax, so he has less brainpower left for anxious worrying after he has completed his food-motivated task.

Stevie Wonder is not extraordinarily anxious, but still – as a young dog she has a good amount of energy, and the kong challenge helps her reign it in and focus it in a productive manner. And clearly, she enjoys it. 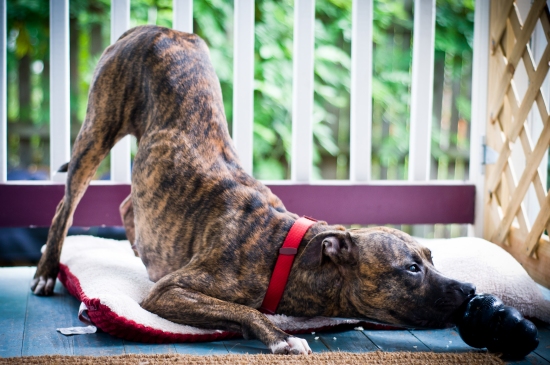 Leave a Reply to Flash and Ollie Cancel reply