In case it hasn’t been totally clear from reading our blog over the past few weeks, Gonzo absolutely adores his big brother. He follows Chick around everywhere and is always trying to play with him and snuggle on him. He hits Chick over the head with toys trying to entice him to play chase, and regularly sits down directly on top of a sleeping Chick as though it were the only seat in the house, even when it’s super hot and snuggling makes no sense. Lately, he has taken to imitation as his favorite way to flatter his big foster brother. Sometimes we come into a room to find them sleeping in the exact same pose, like this. 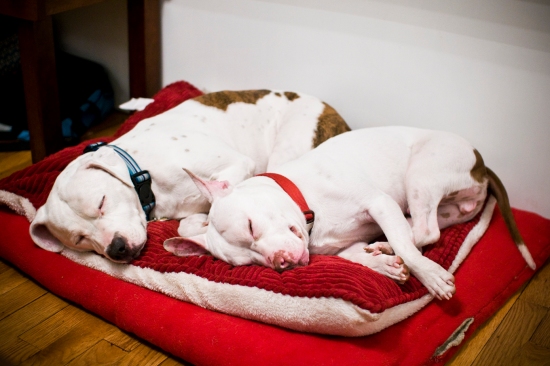 The way in which little Mr. Ears has bonded with Chick has made us pretty sure that whoever adopts him will have to have another dog to keep him company, or at least a few kids in the 6+ age range. He really thrives off company more than your average dog.

Well, Gonzo had his first playdate last night, and everyone agrees it was a big success. It was awesome not only because Gonzo is tiny and white while his playmate is big and black, but also because they are both wicked-cute, and because his playmate’s mom is one of our favorite pit bull lovers around!

I first met Sarah through the StubbyDog project, when I did a photo session of her and her adorable pup Blackie for the cause: 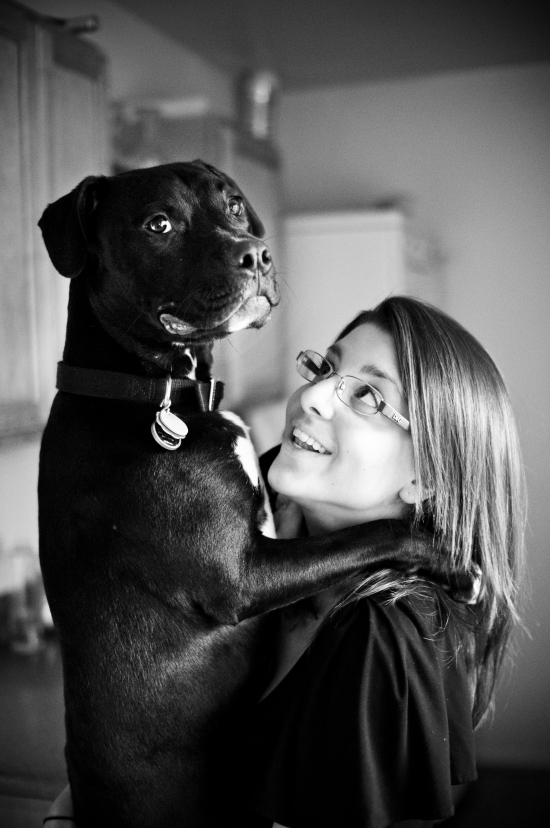 Not only are Sarah and Blackie the cutest human-dog combo I’ve ever met, but they are also wonderful pit bull advocates and keep a great blog, iLove-A-Bull.

Sarah and Blackie came over for dinner last night, and Blackie and Gonzo had a blast zooming back and forth and wrestling around on our deck and yard. As you probably know, Gonzo’s superstar foster brother Chick is a great mentor in good behavior and cuddling, but his days of playing with youngsters have passed. Not so for Gonzo. Nor for Blackie.

But in reality, it was a lot more like this: 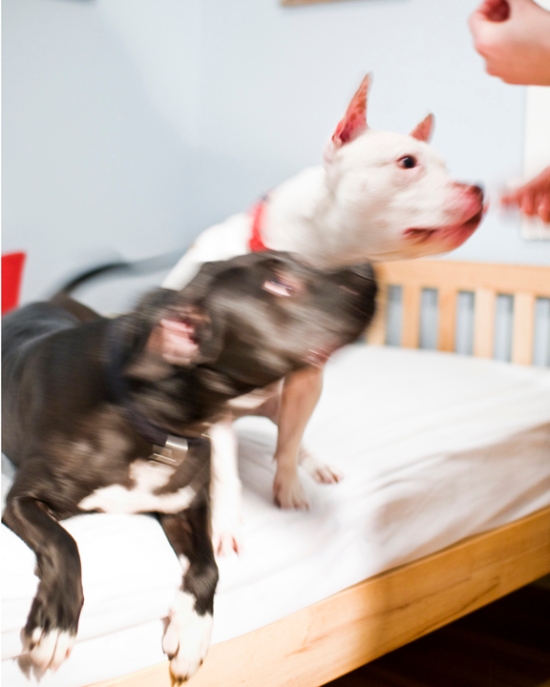 is your shutter super slow, or are those dogs bouncing at the speed of light? actually, both are the case here. 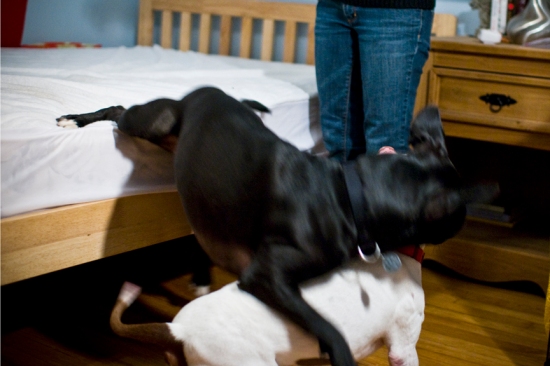 is Blackie launching an air-tackle of Gonzo? yes, he sure is.

is Gonzo retaliating with the biggest play-nip his mouth is capable of? why yes, he sure is.

Gonzo fell asleep swiftly tonight, after all this fun and excitement. Thanks for the visit, Blackie. We hope to see you again soon!

Since we welcomed Lollie into our home as our first foster dog, we get a lot of questions about whether it’s a lot more work taking care of two dogs than one.

This is a hard question and will depend a lot on the personalities, needs, and chemistry of the two dogs you are caring for. If your two dogs are best friends (like Mr B and Miss M of Two Pitties in the City), it is less work than if your two dogs have more individual needs, as do our own doglove Chick and our foster wonderdog Lollie. 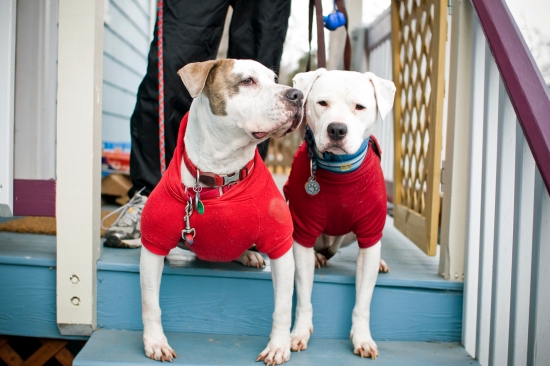 People ask, is it no more work? A little more? Twice as much?

In truth, for us, it’s somewhere in between. It’s double the food and double the poop, but still the same number of outfits (our darling Chick kindly shares his sweaters and jackets with his foster sister, who is thankfully the same size). Double the vet visits and double the monthly preventive meds, but not much more cost (when fostering dogs, the sponsoring shelter or rescue generally pays for all vet care, so we just buy food and treats). Double the enrichment and double the training, but hardly any more walks (we usually walk them together). Double the dog beds and double the leashes, but only a few more toys (we rotate toys among them so nobody ever gets bored). When we go out of town, two dogs means double the boarding, but when we’re in town we get double the cuteness and double the attention (“hey, are those two brothers?”). 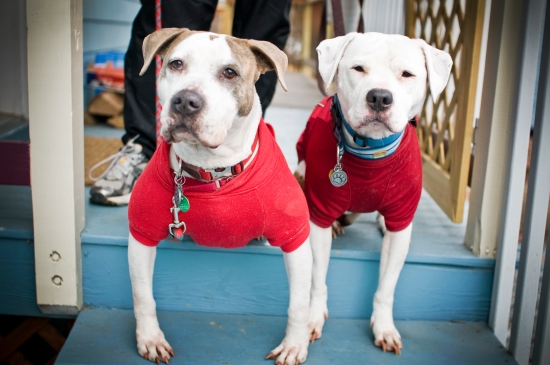 You may recall that we are slowly getting the wonderdogs used to each other using a combination of leashes and baby gates. Until this weekend, we were using a 4′ baby gate that was essentially a complete physical barrier. Lolita’s enthusiastic tongue could sneak through to lick my fingers or Chick’s unsuspecting face, but nothing more.

This weekend we decided to move to a much more modest gate, so the wonderdogs could sniff and greet over or under the gate in addition to observing each other through.

Lollie interpreted the new gate as a fun game / challenge. She never did weasel her way through it thanks to her big muscular shoulders, but she sure did try: 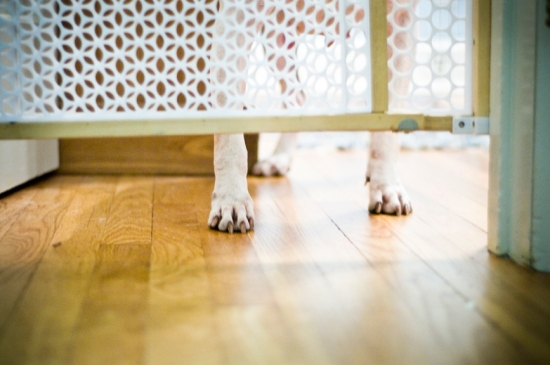 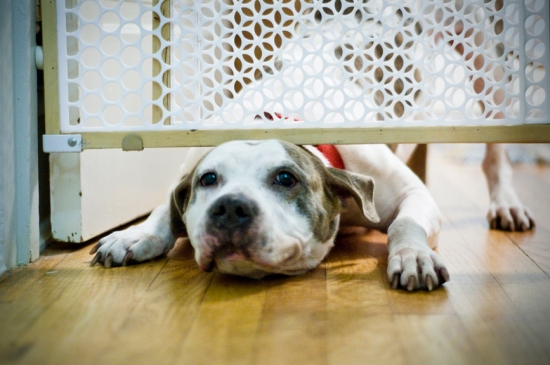 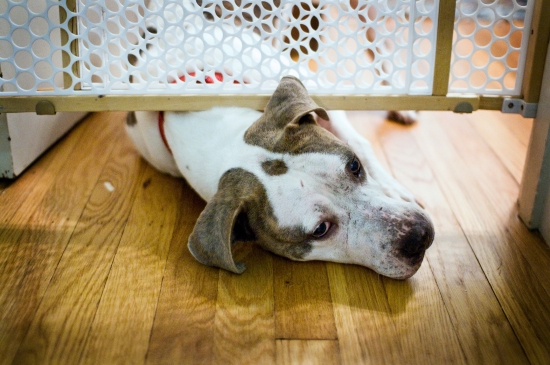 At the risk of confusing metaphors, you know that saying about a stitch in time saves nine? Well, yesterday we got a stitch. In the arm. Specifically, our resident wonderdog Chick got one.

Although they are clearly on the road to being soulmates, it’s going to take a little more time.

The other day, Lollie and Chick went out for a romp in the yard after being pent up all day in separate rooms. In the excitement of burning off their energy doing crazy laps around the yard and frolicking, a playful interlude escalated into a little spat. Their disagreement ended as quickly as it started, but Chick ended up with some scratches and a cut on his arm. A trip to the vet earned him a stitch, some drowse-enducing meds, and the dreaded–but well-deserved– Cone of Shame. Lollie barely had a scratch.

While we wish it hadn’t happened, we are thankful for the early and relatively minor reminder that, borrowing the advice of BAD RAP, “we can’t go too slow” when introducing a new dog into the household. So for now, we’re back to the baby gates, and have learned an important lesson: while your new dog is new, burn off each dog’s energy solo before letting them hang together!

OK, our resident wonderdog, Chick, is leash-reactive. What this means is, when walking on leash and surprised and confronted by another dog, especially an off-leash one, a little switch flips in his head, and he gets defensive. Sometimes even aggressive. The interesting thing about leash-reactivity, though, is that it often is not correlated with a dog’s general dog-friendliness. This is certainly the case with Chick, who is otherwise a lover—or at least a tolerator—of all beings canine.

Still, the stakes were high when we brought Lolita home. We didn’t know her history, and though she had shown to be generally dog-friendly or dog-neutral at the shelter, she had a sad collection of scars littered across her face and front paws. The scars could tell any number of stories: fighting, abuse, under-fence digging, etc. Her first night, we kept the two dogs completely separate, but let them sniff each other’s belongings to get accustomed to each other’s scent. I took Lollie out in the yard alone, and she met our neighbor’s dog, Flash, through the fence. She was super excited to see him and showered him with kisses. A good sign. 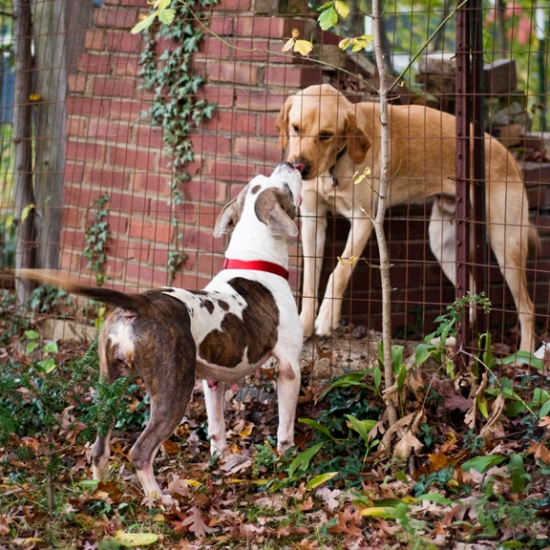 Over that evening and the next, we brought the dogs together very slowly, reinforcing every positive interaction with plenty of bribery and love. We allowed a series of very short sniffs between the dogs, but never more than a few seconds. A joint walk went well, and an open-door visit session through a baby gate resulted in a very wet face for Chick, who was lick-bathed by Lolita. He looked a little sheepish afterward, but didn’t seem to mind the rather soggy attention from his new sister.

Next, the dogs went off-leash together in the yard, and when that went without incident, everybody came indoors. Other than a decisive woof from Chick when Lola tried to climb onto him (a signal she immediately understood), there was no drama. The two happily snacked on treats and trotted around the house together for the rest of the evening.

Vigilance continues, but outlook is positive. 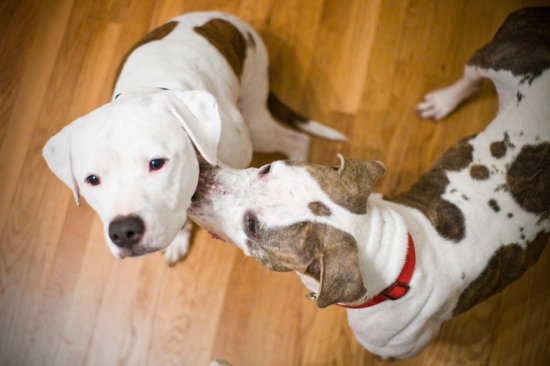