Mama sometimes says that when she calls me a handsome devil, she doesn’t mean that I should actually act like a devil. I don’t really get what that’s about, but she sits me down every now and then and says those words. Maybe I need to pay better attention.

So remember how all week mama has been making a big deal about my foster brother Dude’s heartworms, and how they made him real sick? And how he is also very anxietated when they leave, which is extra super dangerous because it makes his face drool and his heart go thump-thump-thump and it makes the headboard turn into sawdust, and I guess drool and thumping and sawdust are Very Bad when a dog’s heartworms are being killed?

Well. Mama and some of her big-brained dog loving friends got their heads together and thought: we wonder if that Dude were allowed to be together with that handsome devil (not actual devil), if that would help the Dude not feel like he has to thump-thump his wormy heart and make sawdust on mama and dad’s bed and leave big foamy puddles of drool by the doors and windows. 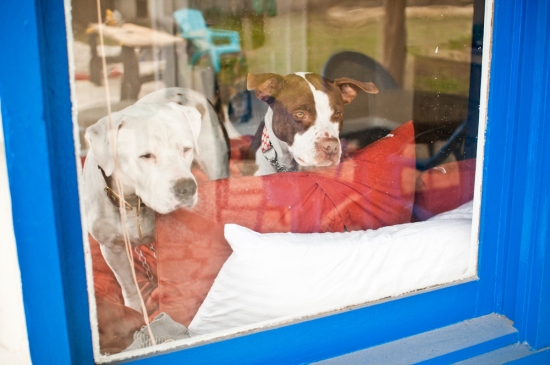 So they tried it. Now friends, you have to understand that this is a really big deal because even though I am a very good boy, I am also a handsome devil and so mama doesn’t normally ever leave me alone with any of my friends or frienemies, in case something happened to go wrong. But I guess I’ve been seeming extra trustworthy recently or maybe the Dude seems extra get-along-with-able, because she started leaving us alone together for a few minutes, then an hour, then two.

Some of you remember when I admitted my former baking habit — I also have a garbage disposal habit, which mama says is related. I thought I had quit it, but it’s just so hard, especially when there’s a youngster around who needs to learn the ropes. How could he ever become a proper housedog without knowing the secrets and smelly wonders contained in a kitchen garbage can?

Well wouldn’t you know, mama and dad sure were surprised when they walked in to the house and discovered this masterpiece in the kitchen. Mama started laughing so hard that she almost fell down, and dad just kind of stood there — but he started laughing too when the Dude trotted into the kitchen and instead of looking kind of bashful and confused like I coached him, decided to go right back to work on the masterpiece. Silly Dude. 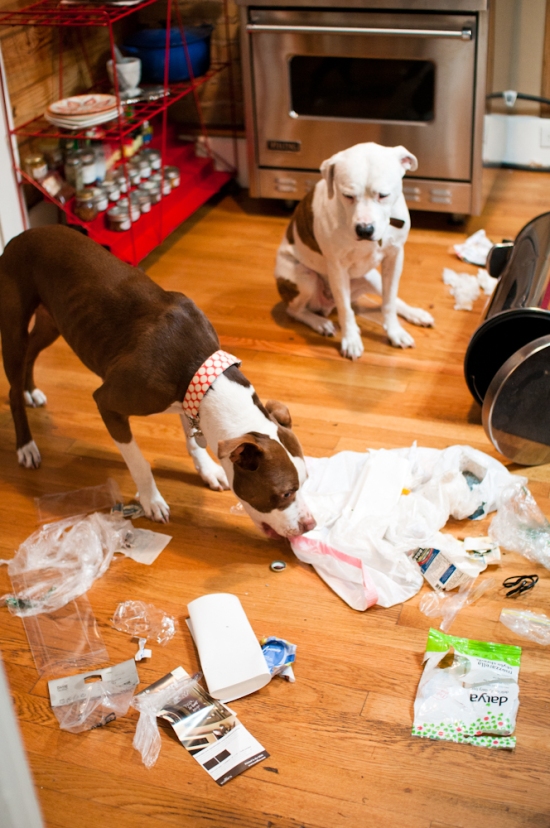 And before I knew it, mama invited us to go outside, where we had to stand for a good, long while.