March 14, 2013 By Aleksandra in Uncategorized 30 Comments

As you could have predicted, the most important part of our preparation for the two-legged puppy has been growing our collection of dog-related things for our the miniature human to wear and play with. This week we were delighted to get a big package from mama’s dear friend, Celebridog Handsome Dan’s mama. In it we found not only all kinds of interesting sniffing messages from Dan himself, but a variety of clothing items for our new puppy, passed down from Dan’s two-legged puppy, Josephine!

Check out this week’s bounty!

But we’ve also been busy preparing for the puppy itself. In past weeks, we’ve focused on preparing for puppy-related things like changes in routine and spaces, and house manners. This week, mama is thinking about getting us ready for all the wonders that a new two-legged puppy makes. Smells, sounds, and all kinds of new messes!

A lot of the time, we go into the room-that-will-be-Junior’s and practice our basic manners while mama does weird stuff like fold clothes in that new miniature white prison cell, or put new-smelling lotions and potions on herself by the dresser. We think she’s just acting crazy because she’s waiting for the stork to come, but she claims it’s all part of the plan. 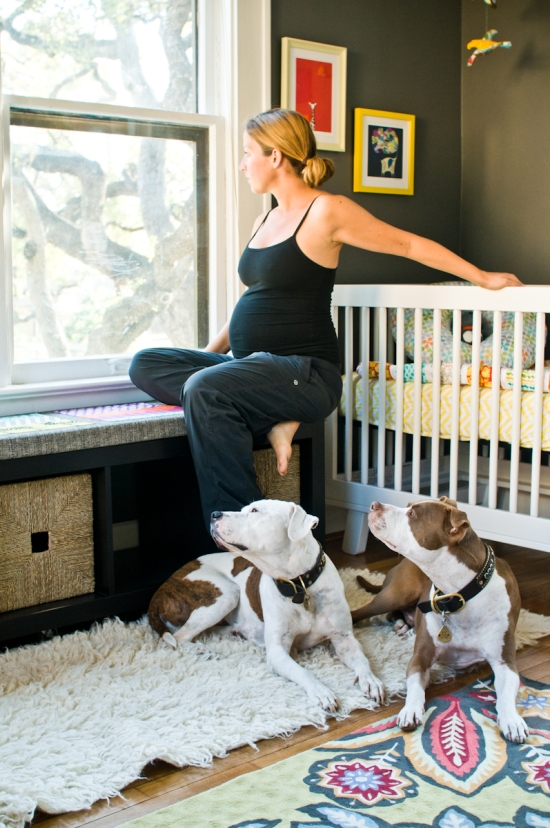 We have written to you before about impulse control and how important it is in a dog’s life in general. Well, it turns out it’s important when you have a tiny human in the house, too! One of mama’s favorite ways to solidify our impulse control is to practice it in challenging areas. For example, when each of us was learning the very-difficult-but-apparently-important skill of sitting and waiting to be released at the front door, we practiced not only our sit-stays, but all kinds of other impulse-control exercises in that very spot. We’d do fetchings there, we’d practice our down-stays, and we’d sit and wait for our dinner bowls. Now, we don’t normally have any problems with impulses in the-room-that-will-be-Junior’s since nothing exciting ever happens in there, but mama says we might in the future — if we don’t prepare. So for now, we are preparing — lots of sits, stays, downs, and leave-its in and around the special room. So far so good!

The clothes-folding and doing stuff in the miniature white prison cell, mama says she’s doing that to get us used to that being A Place Where Things Happen but it also being no big deal. So far, we think she’s super-right. What a boring place! She goes in there and does things in the prison cell, and we just yawn and lay down for a nap. Mama says that’s exactly what she wants — for us to think that no matter what is going on in there, it is a nap-worthy event for us dogs.

We also mentioned mama using new-smelling potions and lotions, and making odd noises that we haven’t heard before. Because we can’t practice relaxing around the two-legged puppy until it’s officially here, the people are trying to approximate some of the sights, sounds, and smells that the miniature human will bring. The potions and lotions are warming us up to the way a tiny human smells, and the noises — which they are trying to hide but we have figured out are just coming from that small white rectangle they’re always looking at — are getting us used to how a tiny human might sound. Mama says that if they were less lazy, they would also consider getting a fake miniature human (the kind that’s made of plastic and you can get at the toy store) and dressing it up, smearing it with lotions and potions, wrapping the noise-making device up with it, and carrying it around like they might do with a real mini human. But let’s face it — our people are lazy, and they are pretty sure that because we dogs are also lazy, we won’t be too concerned about the tiny humans’ smells, noises, and carryings-on. 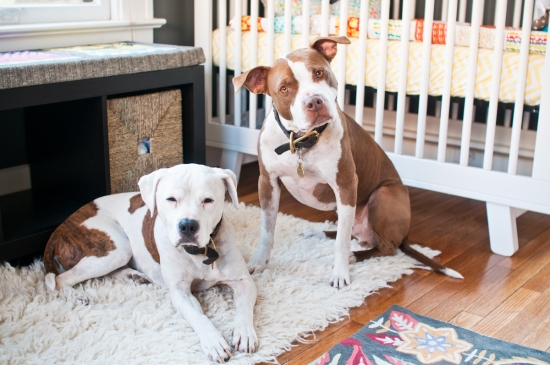 what is that strange sound?

One last thing that tiny humans make — other than noises, smells, and their tiny selves — is big ol’ messes. We have each been practicing since we were first adopted that licking and nibbling on humans is never an ok thing to do, even if the humans are covered in food or other yummables. Mama is relieved that she taught us this from the start, because she thinks it may help the rule carry over to the tiny humans who smell and taste exactly like milk or apple sauce or coconut oil lotion. In case that rule fails, though, we also have a backup rule (a phrase the humans can say that actually makes us physically back our faces up) — if mama or dad says the magic phrase, we know our curious noses and tongues are unwelcome. It’s the same phrase they say when we’re taking undue interest in the snacks on the coffee table, so we think it will transfer well.

We mentioned in a previous post that we are not big toy-stealers or chewers, and mama is relieved about that, too. We can easily co-exist with a toy or other chewable, and as long as we know it’s not ours, we are probably not going to sneak off with it and chew its insides out. If we were more into toy stealage, mama would be working hard on teaching us which things are ours and which things are not ours — and making sure she has a bullet-proof “release” word that makes us give back whatever treasure we found. She’s just lucky we’re such easy boys and we don’t cause trouble with our thievery!

Please join us for another installment next week, when we talk about hitting the town with your dog and baby!

To catch up on the rest of our series so far, check out the following links:
Introduction & Basics
Routines & Spaces
House Manners
**If you are experiencing behavioral concerns with your dog, please seek out an experienced, reputable trainer in your area. In Austin, we sing the high praises of theCanine Center for Training and Behavior, where Chick and Doodlebug learn and play. For more info on picking a quality trainer in your area, see this post.**