February 26, 2013 By Aleksandra in Uncategorized 19 Comments

Like we told you last week, we are expecting a two-legged puppy in a few weeks. And we are excited! Mostly, we are excited about the Very Important things. Like the fact that mama and dad bought a piece of Major Puppy Equipment that is named after each of us.

I (Chick) got a car seat named after me (Chicco):

And I (‘Bug) got a wheelie puppy carrier named after me (Bugaboo):

We think this is mama’s special way of helping us feel included in this whole process, and we think it’s just great. Everybody should get special two-legged puppy equipment that’s named after their own dogs!

The other thing we are extra excited about is that our new puppy’s first pet will be a petbull! Mama adopted him last week and he is already settling in nicely to our future puppy’s room:

We know that these are the Most Important things, even though our mama disagrees. So just to humor her, we’re going to tell you about what she is thinking about as we make room for our new two-legged companion. This week, she wants us to tell you about routines & spaces.

If you’re a dog, you might be thinking: why would a two-legged puppy change anything about my spaces and my routines? But if you’re a person, you may already have some clues. Here are some things on our mama and dad’s list:

In our house, dogs are only allowed on furnitures with permission. There are one or two furnitures that are “dog-friendly” and we can get on them if we want to (like the Stevie-chair), many furnitures that we aren’t allowed on ever (like the sofa), and some  that we are allowed on only when mama or dad invites us (like that big squooshy elevated dog bed that mama and dad sleep on at night). That means that without an invite, we do not get up on them. We have had these rules for a very long time, and mama and dad are now relieved that these rules have always been around. You see, apparently little two-legged puppies tend to lay all over all the furniture, sometimes in a very messy state of nakedness. Imagine being in the middle of changing a diaper and having a dog soar through the air and land right in the middle of the mess. No thank you! Teaching dogs that furniture is off limits unless an invite is extended is a good house rule to put in place ahead of baby’s arrival. Especially in those early months of parenting, these types of boundaries will help create “safe zones” where parents can put a baby down for a change, a nap, to read a book or have a snack — without the risk of an over-exuberant dog landing right in the baby’s lap. And speaking of safe zones . . .

One of us (we will not name which one, but his name may or may not rhyme with the word “stick”) is a little grumpy by nature and can get easily overwhelmed by loud noises, grabby hands, and general commotion. For dogs like “Stick,” it’s good to set up a “safe zone” where the dog can retreat if he gets overwhelmed with the puppy’s antics. In our case, there are a few corners in the house where we have cozy beds and love to cuddle up rest when we’re sleepy, cranky, or overwhelmed. Once the puppy arrives and starts moving around, she or he will be taught that our doggie “safe zones” are off limits — this means no crawling into our area to pet us, pull on our tails, or spit jello on our heads. Some people set up physical barriers that dogs can get around (for example, a low barricade that a dog can jump but a two-legged puppy can’t step over, or an indoor doggie door that’s activated by a magnet that dogs wear on their collars). Other families can get by with a vigilant eye and a strict set of rules alone. In our house, it’s going to be mama and dad’s responsibility to keep our safe zones safe, but we know they will do a good job — it’s in everybody’s best interest for each family member to have a spot where they can hide away when life gets to be too much.

Miniature humans need safe zones too, and it’s good to prepare us dogs for the loss of access to those spaces. In our house, the new mini human’s room used to be our den where we’d hang out with our people and watch movies, help do the bloggings, and enjoy a variety of other activities that usually involve cuddling. Our favorite sofa (that we used to be allowed on) was in there, and we got many snuggles from mama and dad. But in another month or so, that room is going to belong to our new two-legged puppy. Rather than waiting until that time to change the rules and restrict our access to the space, mama and dad set up a gate ahead of time. This has helped us adapt our routines way before our mini human arrives, so we don’t make any bad associations between the arrival of mini-human and the loss of privileges. Our sofa moved to the living room months ago (and we stopped being allowed up on it), and the gate went up last weekend. This gives us a whole other month to get used to hanging out in other parts of the house, even if mama and dad are in our ex-den without us. 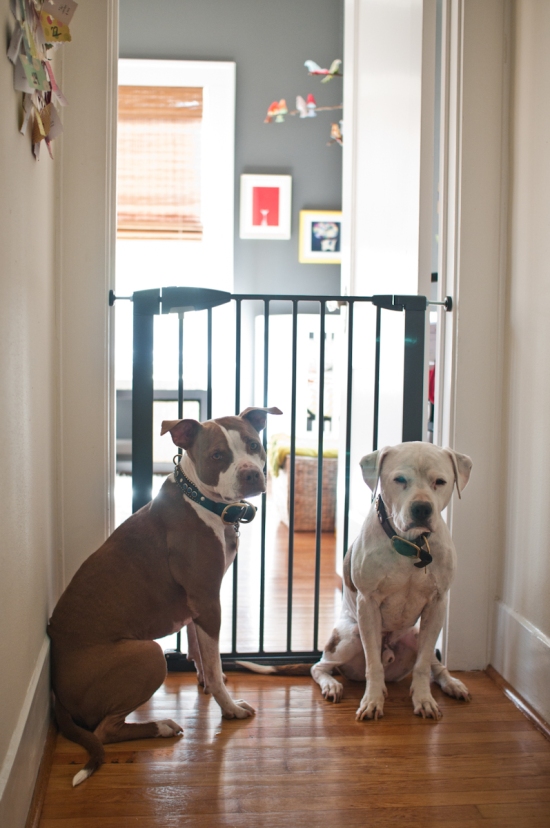 And speaking of mama and dad hanging out in our ex-den without us, we have also started practicing spending less time sitting at our peoples’ feet. We have heard that life is going to get crazy for a while and even mama (who is, we have to say, obsessed with us) will pay us less attention. From what we’ve read, she might even come home sometimes with the two-legged puppy and not let us be in the same room! It’s hard for us to imagine! But this is exactly why we’re practicing now and not later. Mama doesn’t want us to resent our new roommate for taking the attention away from us dogs, so mama and dad are withdrawing it — here and there — ahead of time. If they do a good job, then by the time the puppy arrives, we won’t even feel neglected! So far, they are just practicing going into our ex-den on the other side of the forbidden gate and hanging out in there without us. Sometimes they are doing projects, sometimes they are just talking. But in all cases, we are on the other side of the forbidden gate. It’s a little weird, but it’s just a little thing, so it’s not so bad.

We are also practicing spending time in our room by ourselves even when the people are home. Normally, once somebody gets home, they come open the door so we can come running out of the room all crazy-like to greet them. But lately, we have been practicing staying in there even though the people are home and we are very excited to see them. And sometimes, we get invited to our room for a snack and then left in there even though the people are still home. This is to prepare us for the times that things are happening and we are not invited to the party. We don’t think it’ll happen very much, but it may happen from time to time — and we’d rather be well-versed!

The silly humans are also trying to cut down on the free lovings we get. We aren’t really sure why, since dogs are Very Best at receiving free lovings, but we think it has something to do with how busy they will be with the two-legged puppy once it arrives. When we do good things we still get plenty of pets, kisses, and praisings, and to be honest we get plenty of free pets, kisses, and praisings for no reason other than being Very Cute and Very Sweet. But we do get fewer of them out of the blue, and definitely no more when we are being pushy and demanding. This shift in attention-giving is also meant to prepare us early and slowly to how much attention we might be getting after our new roommate moves in. The sooner we get used to the change, the more relaxed we will remain once Junior arrives!

Mama wants us to mention one last thing this week before we go — the common theme in all of these changes is that they are being implemented both early and slowly. Us dogs are very resilient to change, but lots of dramatic changes at once can be stressful. So spreading major changes in routine and access to spaces and attention out over a period of time — ideally at least a couple of months — is a much better way to prepare us dogs for a new tiny human than a more sudden shock. Implementing changes early has the added benefit of disassociating the change from the arrival of the two-legged puppy — an experience that we all want to be as positive as possible!

Please join us next week when we tell you about House Manners & Baby Matters!

**If you are experiencing behavioral concerns with your dog, please seek out an experienced, reputable trainer in your area. In Austin, we sing the high praises of the Canine Center for Training and Behavior, where Chick and Doodlebug learn and play. For more info on picking a quality trainer in your area, see this post.**