Dog people love to anthropomorphize their pets. We have all done it.

Doodlebug is proud of this new Sirius Republic bowtie.

People love to project our own dreams and emotions onto dog-dog relationships, too. We throw big words around — Love. Hate. Jealousy. In the case of our dogs, we do it too. We invent personalities and draw conclusions about how the dogs feel about each other, even though in reality we can rarely know for sure. In our own house right now, the Dude seems like the goofy, child-like little brother who is obsessed with his Yoda, Chick. Chick is older, wiser, too-cool-for-school, and tolerates the young ones with a stoic patience that only the most magical of dogs possess.

Of course, we wish with all of our might that he adored each of the dogs that come through our home, and actually preferred having another dog in the house. But does he? Hard to say. There is no doubt that in a choice between people and dogs, Chick has always chosen people. He learned early in adoptive life that people are the ones who control all the food, beds, walks, toys, and games, so we’re more interesting than other dogs. And fosterdad and I prefer it that way.

And yet, from time to time a dog comes along who Chick not only tolerates, but genuinely seems to enjoy the company of. When former foster Stevie Wonder would try to snuggle on Chick, he would tolerate it sometimes, and run away other times. But he never seeked it out. With other dogs, he has been more willing to cuddle, though I wonder if it was more that he wanted a piece of the prime real estate where the other dog happened to be sleeping, and not the warm furry body that he was seeking out.

But his relationship with Snickerdoodle has us wondering whether this is a different kind of thing for our grumpy old man.

Pre-Dude, Chick’s favorite resting spots were the bed in our master bedroom, the Stevie-chair in the living room, and underfoot in the kitchen. The Dude right away took to sleeping on The Dora in our guest room. Pretty soon, we started finding Chick in there, too.

Is this love? Maybe.

And there’s more. It used to be that Chick was clingy and needy to an unhealthy level. Wherever we were, he needed to be no more than four feet away. Now when we come home, if they’re in the middle of a particularly satisfying nap on The Dora, they will both come greet us, and quickly retreat back to their dogpile in the guest room. It’s new ground for us, and we’re trying to figure out whether it means anything at all. What we know for certain is that it is both unprecedented and oh-so-adorable. 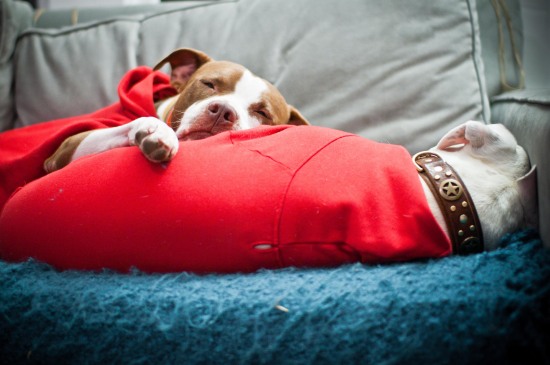