January 17, 2012 By Aleksandra in Snickerdoodle 80 Comments

We woke last Friday before dawn to the sound of Snickerdoodle coughing up blood. It was alarming, to say the least. A few minutes later, the Doodlebug was in the car on the way to the vet, and I was trying to contain my nerves as I drove there, glancing over at him every couple of seconds to make sure he was breathing.

Some extensive testing and a couple of X-rays later, we learned that Snickerdoodle’s heartworm is at an advanced stage. Although we knew he had heartworm from the beginning, he seemed asymptomatic, so everybody assumed that his was a milder case — as is normally expected of young to mid-aged dogs. However, the presence of blood in his lungs and the swelling of his heart and clouding in his chest revealed by his xray puts him at a Class 3 (out of 4).  Dogs with a Class 3 diagnosis are risky to treat and have a “guarded” prognosis with treatment — an expected mortality rate of 10-20 percent. Snickerdoodle’s generally healthy behavior and appearance put him on the optimistic end of the prognosis, but still — ample reason for his doting foster mom to worry.

We had planned to wait a month to begin his treatment (a series of very painful arsenic-based injections into the deep muscle tissue in the lower back), but the new information increased the urgency. He had his first injection on Friday.

For the next ten weeks, our task is to keep the Dude very, very calm. The injection’s task is to break down the worms and effectively kill the disease over the course of 10 weeks. But a big risk associated with the treatment is that any increase in heart rate for the 10-week duration poses a risk of pulmonary thromboembolism (blood clots) because of the pieces of broken-down heartworm traveling through his blood. This is the greatest danger for dogs undergoing treatment, and is more of a threat with more severe cases like ours. This means that for two and a half months, the Dude can’t go for walks, play or run in the yard, or meet other dogs (which gets him VERY excited). The poor guy is on a strict regimen of rest, and with the stakes as high as they are, we are taking the doctor’s orders very seriously.

For Doodlebug, the doctor’s orders are complicated by his serious separation anxiety, which in the first few days (pre-treatment, thankfully) induced panics that resulted in destroyed crates, chewed furniture, and huge puddles of drool on the floor. We have been working overtime to combat his anxiety through a combination of herbal remedies, anti-anxiety meds, lots of ride-alongs for the Dude, and varying degrees of “free range” status in the house when we’re not home. We have slowly begun leaving the Dude and the Chick loose in the house together when we’re not around, hoping that Chick’s stability and company will serve as a comfort to Doodlebug. We’ve even set up a complex video monitoring scheme involving the cameras on our laptops and an iphone, so that we may spy on the Dude when we’re not home and make sure he’s not working himself into a heart-thumping panic. 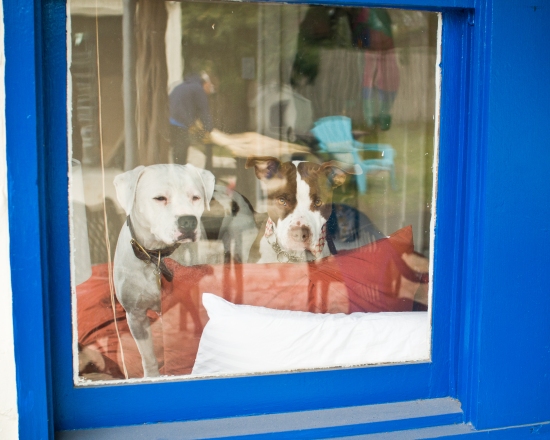 We’re not sure what his heartworm will mean for Doodlebug long-term. If he survives treatment, he may live a decade or longer, and grow to be a very old man. That is our dream for him. Some dogs treated for heartworm suffer from abbreviated lifespans, while others go on to live full and healthy lives. The result depends on the severity of the disease, how long it was in the dog’s system, the dog’s genes, and a little bit of luck. But for now, he needs to get through the treatment. If everything goes well through the end of March, we’ll know he’s out of the woods.

Given his complex issues, we know that Snickerdoodle is likely to be with us a while. And given how seamlessly he fits into our home and our life, that’s just fine by us.
*****
To check out our other blog — about pit bull advocacy, education, rescue, and events in Texas — click here.
For photos, bios, and adoption info about Love-A-Bull’s other adorable, adoptable pit bull type dogs, visit here.
For more info on Snickerdoodle, click here.