August 17, 2012 By Aleksandra in Uncategorized 26 Comments

Aunt Disney and our dear tripod friend Sierra are going to be almost as excited as I am heartbroken — my long-distance romance and female version of myself, Anna, has just packed up her bags and moved up to doggie heaven.

After 14 years of being the sweetest, softest, most beautiful, charming lady I have ever loved, Anna decided it was time to step off the stage. She lived a great life up to the very last day.

Anna wasn’t just all the wonderful things I mentioned above — she was also a classy broad with a great story. You see, her dad — a fireman — found her tied to his truck 13 years ago with some dumb note about her being a present to the department. Can you imagine it? Beautiful little adolescent Anna, abandoned at the fire station, dirty and scared as can be?

Well luckily Anna’s daddyman — our good friend Dan — didn’t think twice about what to do. He snapped Anna right up and made her his co-pilot and his best friend. And boy did they have some adventures together. She used to even get to ride around in the fire truck with him, pretending to be a dalmatian . . . until the time that she accidentally locked the humans out of the truck while they were off saving lives and putting out flames. It kinda sounds like something my aunt Disney would have done to me, huh? Oops!

Mama first met Anna and her family when she was taking photos of pit bull families for the Stubby Dog Project. As soon as mama told me about Anna’s special story, I started jumping around and doing my little Chicken-dance and saying “mama, I have GOT to meet this female Chick!” and also, “mama, you have GOT to take her photo at the fire station!”

Well I am full of good ideas, aren’t I? So Anna and I began our years-long romance, and mama met Anna, her canine siblings Roscoe and Gigi, and her humans at Dan’s fire station. Just look what a beautiful scene I dreamt up for their portraits! 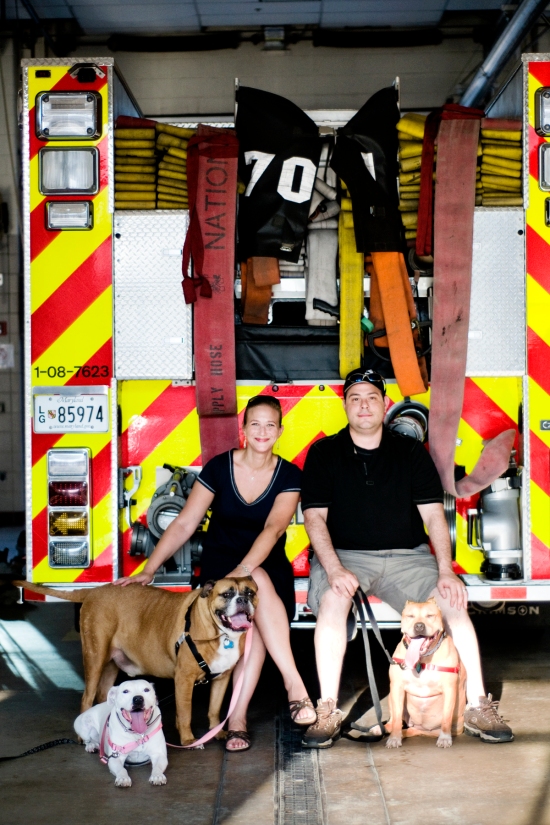 It’s not just Anna’s rescue story and how madly we were in love that make her so special. She had a way of making others fall in love, too. Her mama Kelly says that seeing the bond that Anna and her daddy shared was one of the big things that made her fall in love with him years and years ago.

Anna also helped her mama and dad fall in love with pit bull dogs, and eventually convinced them to adopt her sister Gigi, too.

There were other things that made Anna so much my soulmate — like the time dad and I were both out of town during a hurricane and mama went over to Anna’s house so she didn’t have to be all by her lonesome, and Anna snuggled with her all night long to make her feel safe just like I would have done. What a gal.

Yes, we all loved Anna. Everybody did. That’s why it was so hard to say goodbye to her last week, when she packed her bags for doggie heaven. She cited “complications” and “old age.” But it didn’t make us any less sad.

We’ll miss you, Anna. And we know that everybody will hold their dogs a little closer tonight in honor of all the love you shared in your grand 14 years.